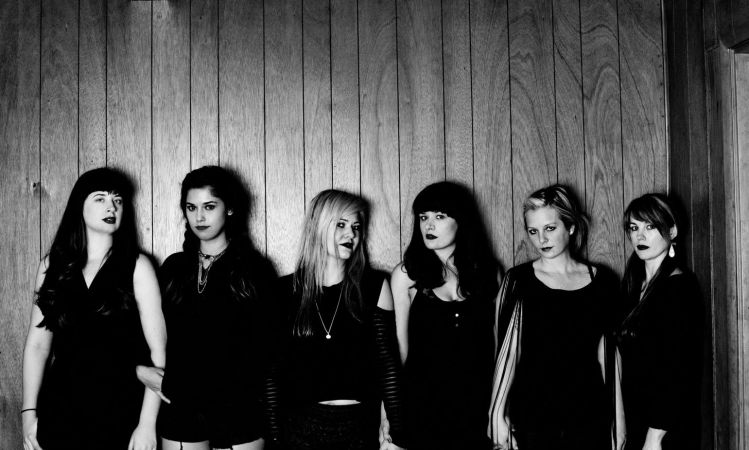 Sang Bleu is the all-ladies band that Las Vegas has been waiting for. The band consists of six members: Maggie Leon (lead vocals), Sulayla Arnett, Stephanie Fuchs, Elizabeth Scheib, Karli Stenger and Jennifer Gerena. According to Leslie Ventura at the Weekly, they sound like a mix between Le Tigre and the Yeah Yeah Yeahs. Le Tigre is definitely an influence you can hear from their heavy guitar riffs choked full with distortion. When I hear the song “Savages” it automatically reminds me of Le Tigre’s self-titled album. Have a listen to Le Tigre’s guitar sound on “The The Empty” and Sang Bleu’s guitar on their track, ”Savages”.

All bands have their influences somewhere, but after you listen to Sang Bleu’s three-track EP, they are pulling influences from everywhere. Not only that, they even have an entire track that is sung in Spanish. In the song “Le Ventana” the ladies slow down the pace with a beautifully somber melody. With their last track they bring out an eerie vibe coupled with an intense beating drum, haunting coos, and a xylophone to tie it all together. The last song “Blood Diamond” is reminiscent of a nursery rhyme with an added witchy spell to go along with it–dark and disturbing, just like nursery rhymes! This track also transitions into another song called “Pretty White Boy” which makes a full circle back into their fast paced rhythms and distorted guitar riffs heard on their first track.

Where To Find Them

The ladies have been known to play many of the venues in downtown Las Vegas. Most recently, they played a beautiful set at The Velveteen Rabbit where colorful projections  blanketed their performance. Follow Sang Bleu on their their social media outlets to listen to more or find out where you can catch them next! Down below is a short podcast dedicated to the rockin’ ladies. Have a listen!